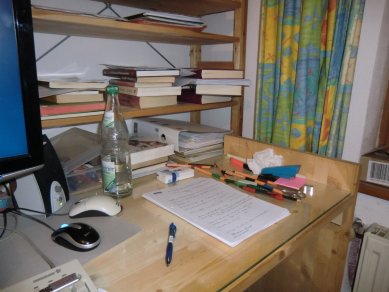 5. Substructure of Quarks and Leptons and a new Conception of the Universe

and the related problem of fermion families. Recently I have put forward a new idea, in which fermion and vector boson states are constructed from constituents ('tetrons'), which take the geometrical form of a tetrahedron or a cube. The model encodes all observed structures and phenomena of elementary particle physics in group theoretic items of the tetrahedral group which is isomorphic to the permutation group S4.

These ideas have finally been merged into a complete new conception of the physical world, whose main features can be described as follows:

-Our universe is a 3-dimensional elastic substrate which once has condensed and now expands within some higher dimensional space (with dimension >=6).

-The elastic substrate is built from invisible 'tetron' constituents with bond length about the Planck length and binding energy the Planck energy.(*)

-All ordinary matter quarks and leptons are quasiparticle excitations gliding on the elastic tetron substrate.

-Since the quasiparticles fulfill Lorentz covariant wave equations, they perceive the universe as a 3+1 dimensional spacetime continuum lacking a preferred rest system.

-Any type of mass/energy induces curvature on the spacetime continuum as determined by the Einstein equations.

-The 24 known quarks and leptons arise as excitations of a tetrahedral fiber structure, which is made up from 4 tetrons and extends into 3 additional 'internal' dimensions.(**)

-While the laws of gravity are due to the elastic properties of the substrate, particle physics interactions take place within the internal fibers, with the characteristic interaction energy being the Fermi scale.

-The masses of quarks and leptons can be determined from a Heisenberg type of Hamiltonian which describes the interactions of 2 neighboring tetrons.(***)

-3 of the quasiparticle excitations naturally have tiny masses, due to the conservation of total internal angular tetron momentum, and correspond to the 3 neutrino species.

-As a consequence of the free rotatability of the tetron isospins over each base point there is a local SU(2)xU(1) gauge symmetry.

-Weak parity violation arises from the handedness of the internal tetrahedrons.

Details of the model like symmetry breaking, distribution of charges and mass generation are to be found in the following publications:

Space and Family, my first paper on the subject, contains the main idea and a geometrical interpretation, which is still relevant at this time e.g. for inclusion of gravity. Spacetime is considered discrete at very small distances, with only permutation symmetry transformations remaining relevant. When a fermion tetrahedron moves through a gravitational field, the directions of its 4 tetrons are given by the 4-bein which defines the gravitational field at that point.

Development of the Tetron Model

Some Remarks on the Tetron Spin Problem

The History of the Tetron Model (in german)

Chirality and Symmetry Breaking in a discrete internal Space, Internal space is interpreted as a vibrating 'crystal' or 'molecule' with pyritohedral symmetry, quarks and leptons being the normal modes of the vibrations.

Color and Isospin Waves from Tetrahedral Shubnikov Groups, an important supplement of the previous paper, in which internal spin waves are considered.

A microscopic Interpretation of the SM Higgs Mechanism, an extension to include the whole Standard Model symmetry breaking in the model

A Microscopic Approach to Quark and Lepton Masses and Mixings, an attempt to calculate the mass spectrum of quark and leptons

Particle Physics and Cosmology in the Microscopic Model, the latest paper on the subject, a complete review which includes also an interpretation of gravity in the tetron model

Index of my Homepage

A naive philosophers view on COSMOLOGY